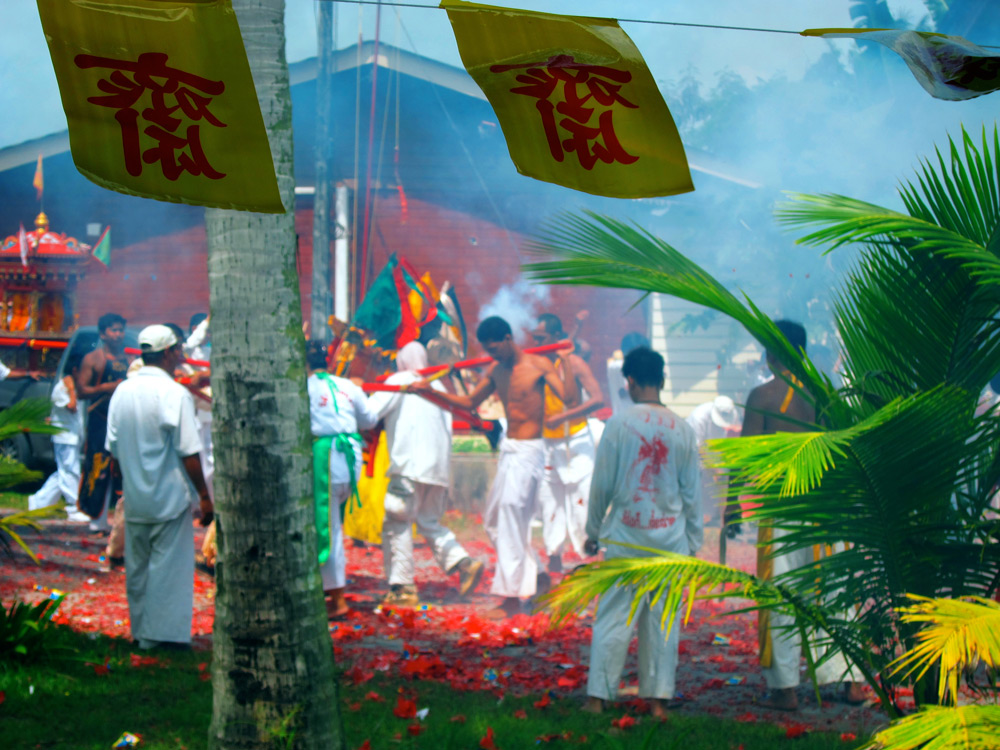 The Vegetarian Festival occurs every year in South East Asia, it’s beginning marked on the eve of the ninth month of the lunar calendar. It is celebrated mainly in Myanmar, Thailand and Malaysia.

It is a bizarre festival to say the least. A spectacular event even. Noisy, colourful and sometimes shocking to the faint hearted. It is a festival that is observed all over Thailand, especially in towns with communities of Chinese origin. 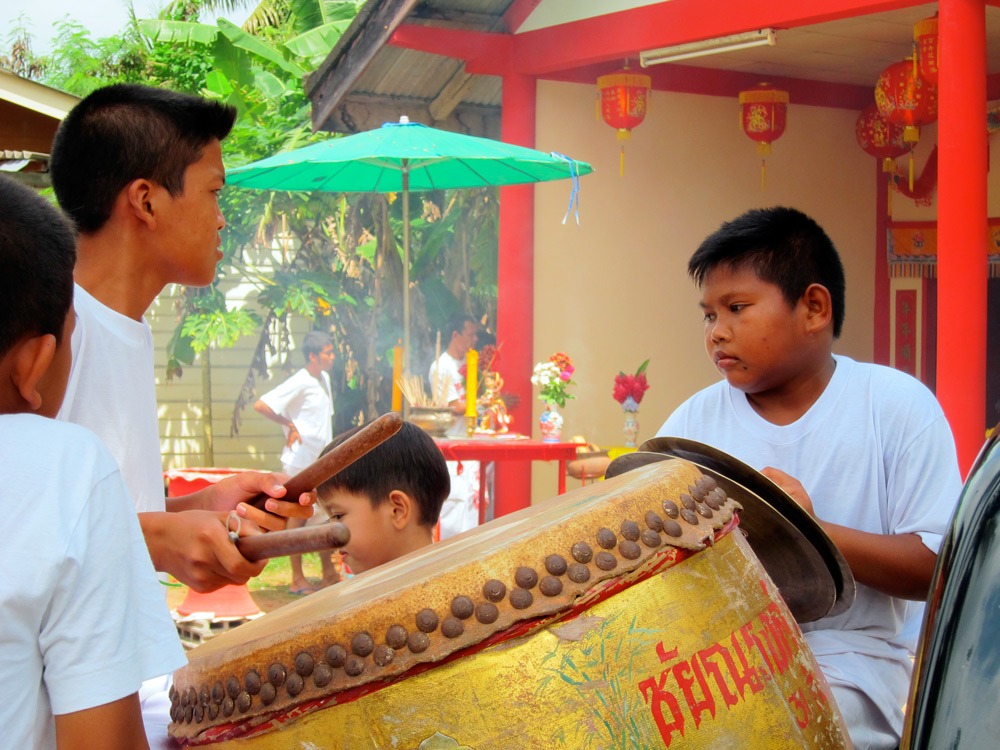 For nine days large majorities of each community are brought together in a blur of white clothing, yellow and red flags and shrouded in smoke from fire crackers and incense. Then there’s the piercings, self mutilation and walking on various pain inflicting things that only the trance induced devotees have to endure.

So where did this interesting festival come from?

Origins of the Vegetarian Festival

I remember when I had recently arrived in Thailand and my boss at that time told me about the vegetarian festival. He was a long term Phuket resident and Phuket is the main centre of the Vegetarian Festival in Thailand where 35% of the population are of Chinese origin. He said that long ago Phuket was gripped by a plague like epidemic and hundreds of people mysteriously died. Chinese merchants suggested a period of abstinence from meat, as they believed it to be rancid and the main cause of the ongoing loss of life. Sure enough this seemed to end the spate of deaths.

A similar story tells of a troop of traveling Chinese Opera performers who fell sick with malaria on the island. After a strict vegetarian diet and prayers to the Nine Emperor Gods the opera troop made a complete recovery. At the time this was seen as a miraculous occurrence, as malaria was a fatal illness. The troops were overjoyed that they had survived and so celebrated by holding a festival in honour of the gods. 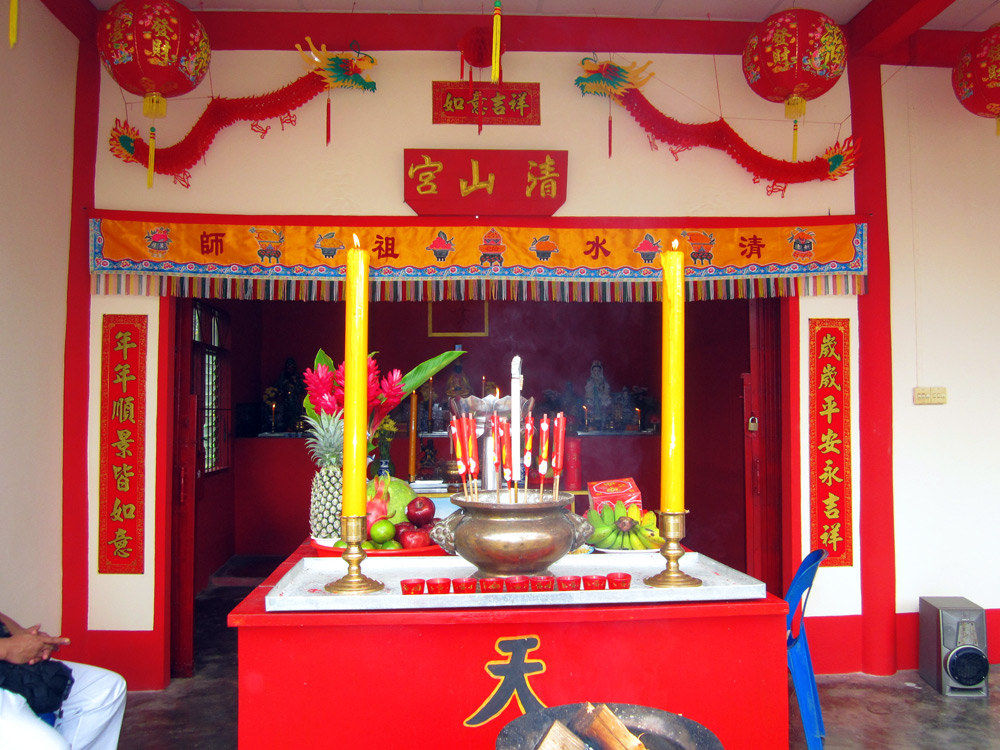 Whatever the true origins of the festival are, it certainly ties in with the Chinese taoist festival, the Nine Emperor Gods (Wikipedia). This is celebrated in China at the same time, with devotees dressing in white for nine days of prayer and chanting in a carnival type atmosphere.

The Vegetarian Festival in Thailand 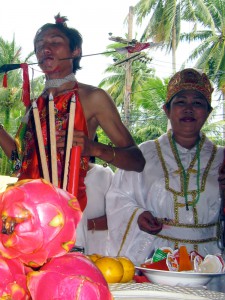 The vegetarian festival in Thailand is “Tesagan Gin Je” in Thai. It is celebrated all over Thailand, drawing in crowds of visitors to witness the bizarre religious rituals that are performed, particularly in Phuket. It is usual for many religious devotees, who are called mediums, to perform mutilation on themselves or other mediums who are in a trance like state.

For participants in the vegetarian festival it is seen as a time of spiritual cleansing and merit making for the gods and ancestors. For nine days one is expected to dress in white and gin je, which literally means abstaining from meat, poultry, seafood and diary products. Participants are also expected to behave correctly, keep their bodies clean and avoid sex and alcohol.

Where to eat during the Vegetarian Festival

Restaurants and food vendors selling Je (vegetarian food) will hang out a yellow flag decorated with red and the word เจ meaning Je. This clearly marks their involvement in the festival and allows others who are taking part to know where they can eat. One important condition of participating in the festival is to not use cooking utensils and cutlery that has been in contact or near meat products. 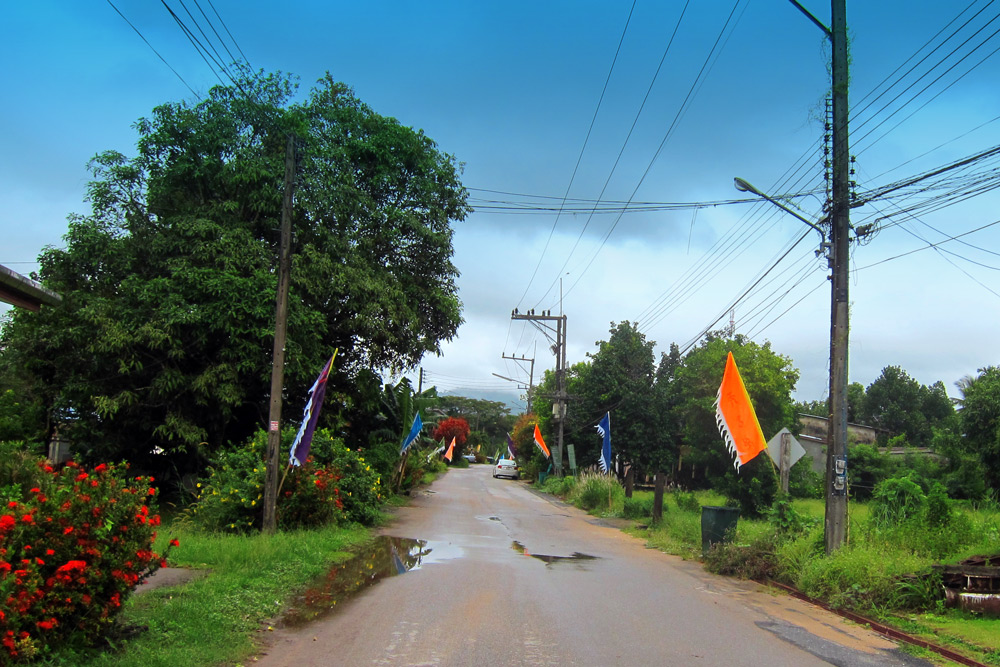 As the vegetarian festival is celebrated by the majority of the community there is vegetarian food available all around Khao Lak. The best places, however, are near the Chinese Temple in Khak Khak and near the other Chinese shrines where food vendors sell a multitude of vegetarian snacks, deserts and main dishes.

The Mah Song of the Vegetarian Festival

If you wish to spectate the vegetarian festival the main draw are the Mah Song. The Mah Song are the devotees who invite the god’s spirits to possess their bodies. Mah means horse in Thai, Song refers to the use of the devotees body’s by the spirits. The spirits use the bodies as a vessel from which to act, almost like a vehicle such as a horse was in ancient times. 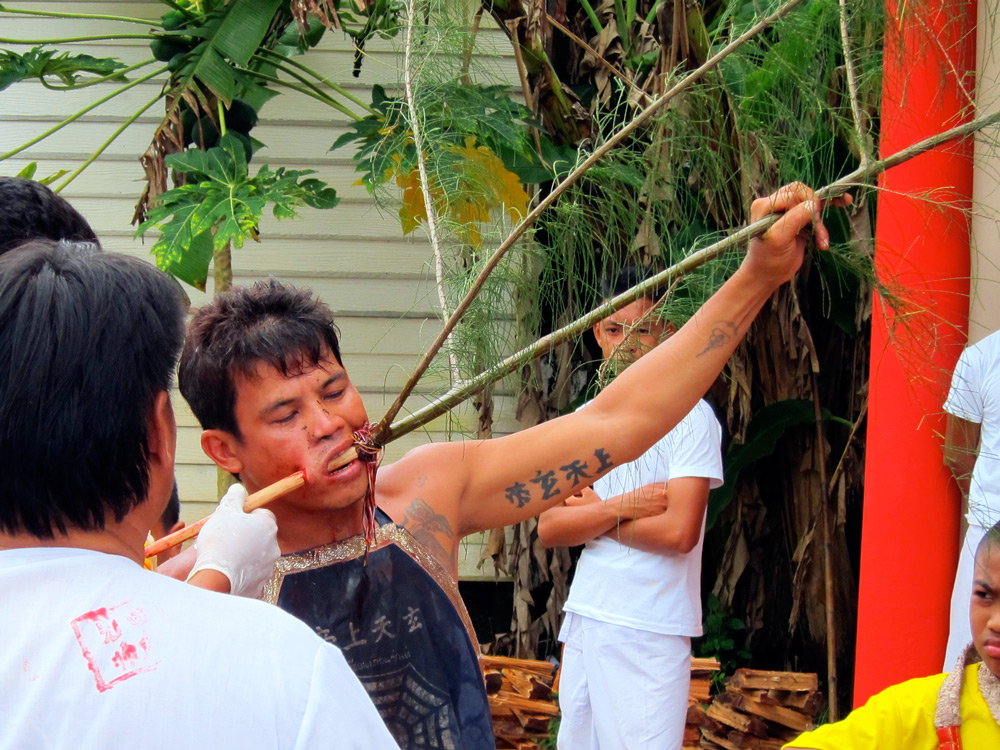 During the vegetarian festival it is common to see processions of Mah Song dressed in elaborate costumes. This is where the squeamish should avert their eyes. The Mah Song pierce themselves with a whole host of instruments in various parts of their body, without anaesthetic and whilst in a trance-like state. Commonly they pierce their cheeks or tongue with skewers or swords, though impaling can also be through cheeks, arms, legs and back and sometimes with bizarre objects like branches, flowers and axes. Some Mah Song may even wrap themselves in firecrackers, or stand near them when they are lit. 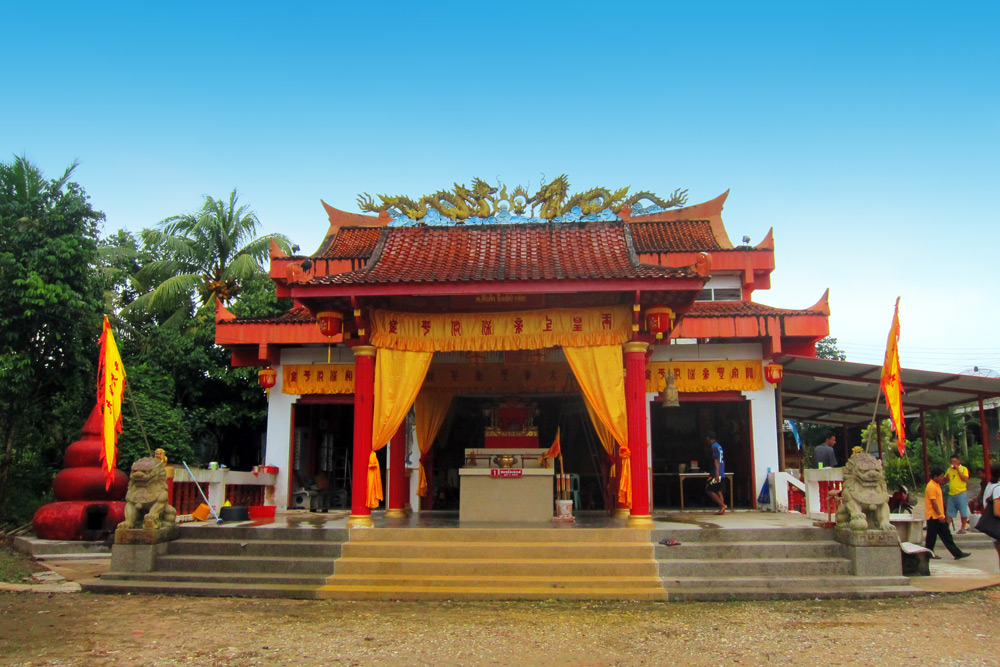 The Chinese Temples in Khuk Khak and Takua Pa are the main centres for the Vegetarian Festival in the Khao Lak area. At the Khuk Khak Temple in the evenings the Mah Song also participate in fire walking and blade-ladder climbing. Large crowds gather here to observe the activities and also receive blessings from the Mah Song. Night and day, Khao Lak is alive with the sound of fire crackers and fireworks. The daily processions can be seen around town as the Mah Song make house calls where local residents have left offerings.

The Mah Song have to be unmarried men or women without families of their own and undergo a series of rituals for protection during the festival. The Nine Emperor Gods Festival in China does not feature the Mah Song and is likely to be derived from the Indian Thaipusam festival.

The purpose of this festival is veneration to the gods by the devotees. It can have a profound effect on the Mah Song too. For days, even weeks after the festival the devotees are seen to be extremely calm and focused in their daily activities.

The Vegetarian Festival Schedule of Events

Khao Lak Wired has compiled a complete schedule of events happening in the Khao Lak area during the Vegetarian Festival. The Chinese Temple (San Jao Bun Tao Gong Temple) in Khuk Khak is the main focus of temple activities for the Khao Lak community. If you can not make it to Khuk Khak then similar procedings also happen at the Chinese temples in Bang Niang and the Nang Thong are of Khao Lak. 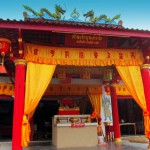 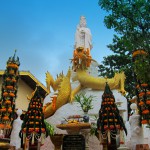 The festival always falls on the first days of the ninth Chinese lunar month, and for nine days participants observe the following commitments: 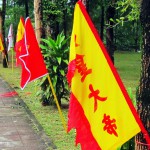 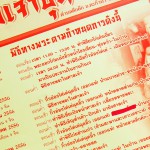 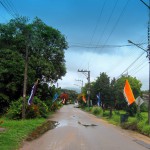 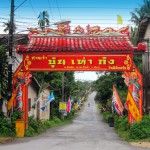 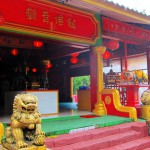 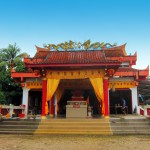 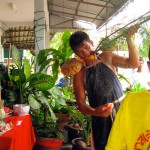 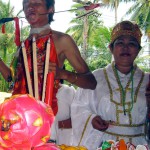 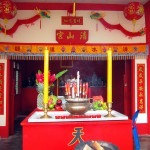 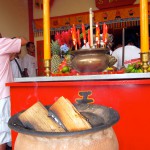 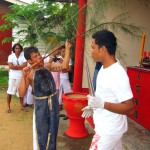 Mah Song prepares for his housecalls 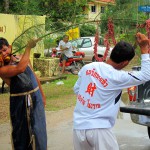 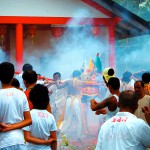 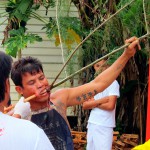 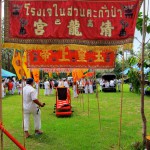 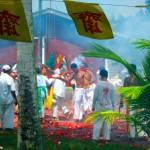 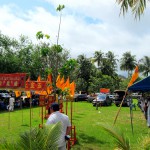 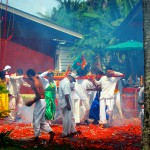 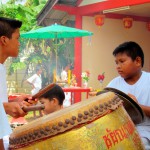