As Khao Lak’s high season comes to an end the local weather and climate remains very reminiscent of the high season. The latter half of May and early June are usually unpredictable times as the monsoon winds change direction, bringing with it heavy rain often with thunder storms.

As Khao Lak becomes quieter and quieter we are still enjoying plenty of days of sunshine, blue skies and a scattering of high, white fluffy clouds. It has also been incredibly hot. With the rainy season holding off, Thailand’s hot season continues in Khao Lak.

By the afternoon of 18th May 2015 Khao Lak residents were still enjoying a day of blue skies with a few scattered clouds. There was a slight cooler hint of rain in the air but still the area remained dry. The temperature was a typical 32°C, though it felt much much hotter. 19th May started with more clouds to the east in the early morning, with the sun occasionally breaking though. There was definitely a coolness in the air suggesting it would finally rain, but clear blue skies to the west suggested otherwise. By the afternoon the climate was back to the now usual 32°C with high humidity. Some rain to cool things down would have come as some welcome relief. 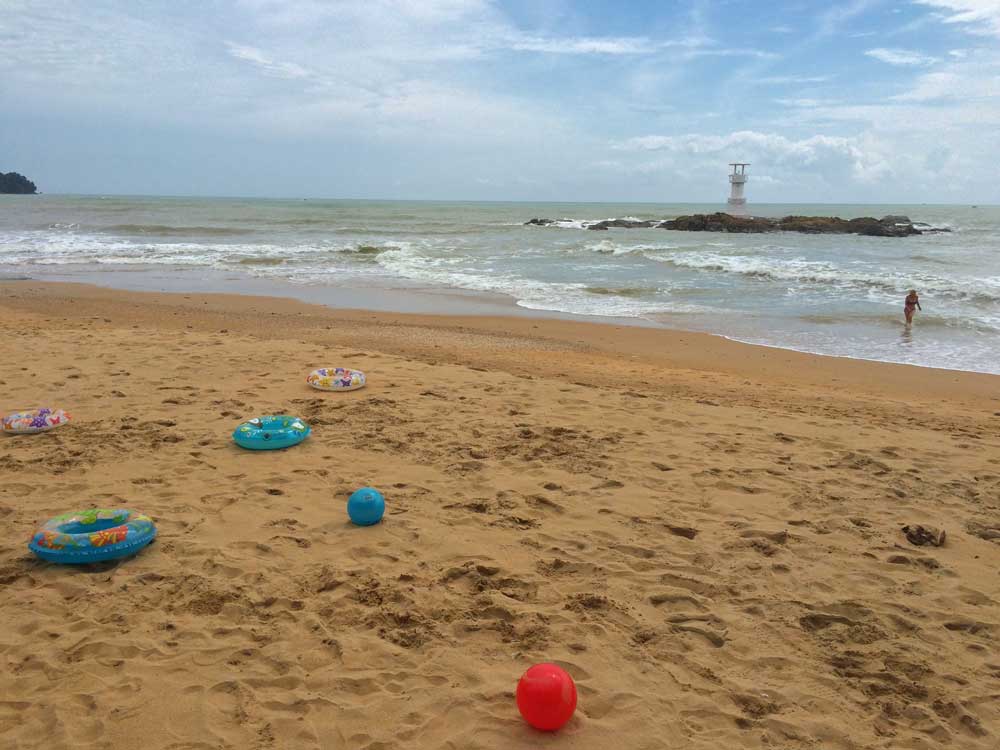 Make the most of good weather and deserted Khao Lak beaches

20th May and at 7:30am there was some very light rain in Khuk Khak just a few kilometres north of Khao Lak. Overcast skies and low lying clouds promised a wetter day. But nearby in Khao Lak it was blue skies and very hot, for another day running. Incidentally it did rain more in Khuk Khak that day, an example of just how localised the Khao Lak coastline weather can be. Rain in one place, and blue skies and sunshine nearby.

There was clearly no sign of rain waking up on the 21st May. Blue skies and a warm 31°C by 9:00am in the morning. The forecast predicted storms around midday, we would see. The reality, by 3:00pm it was yet another hot humid day.

But the Khao Lak Weather Can Change

It rained very early on 22nd May 2015, around 6:30am followed by an overcast morning. At 10:42am there was a heavy rain shower for 20 minutes followed by on and off light rain through the afternoon. Although still 31°C the air felt much cooler and it was a rare afternoon that air-conditioning units could be turned off. It seemed that the following day the rain was short lived. 10:00am and Khao Lak was enjoying blue skies and sunshine once more, though the air had cooled somewhat thanks to the previous days rain. After lunch at 1:00pm the wind picked up and there was a heavy rain storm for around one hour. Once the rain subsided the afternoon remained overcast, but it was a lovely cool afternoon. 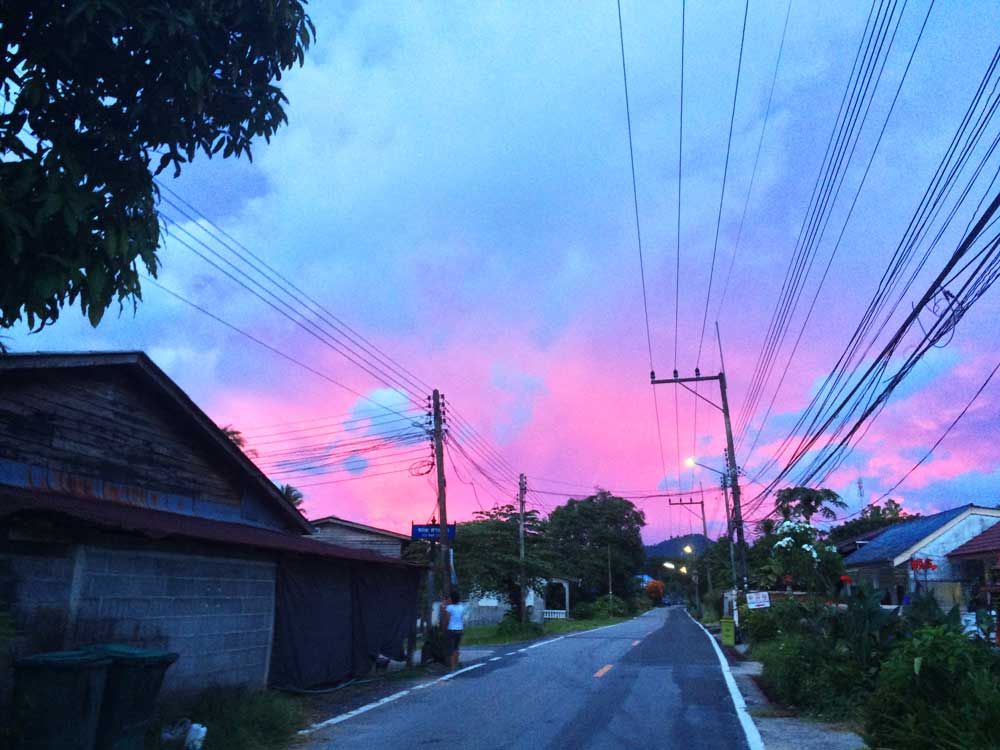 By the 25th May the Khao Lak weather was feeling a bit more like it should be. The temperature was 26°C at 7:00am with overcast skies and a persistent drizzle. It had rained hard during the night. Khao Lak was nice and cool and very, very wet. The rain stopped around 8:30am and the day continued overcast and damp. There was a heavy rain shower at 1:30pm. It rained a lot again during that night, enough to cause one of the first power cuts of the low season.

The morning of the 26th May revealed very wet and damp weather at a cool 27°C. If the sun was to stay in on this day, as predicted then it could well be the first day of the month that remained below 30°C. There was high cloud cover during the morning, though the sky was bright. It rained heavily around 12:30pm which continued as on and off rainy showers throughout the afternoon and evening. It did indeed remain below 30°C that day.

Isolated thunderstorms, currently 26°C with an expected high of 29°C

The thunder storms never materialised but the day did remain overcast with moderate humidity.

The 28th May was overcast but the sky was very bright. There was the odd, quick rain shower later in the day but the local climate was definitely improving rather than worsening. The 29th marked the beginning of the last weekend in May 2015 and Khao Lak was once again back to blue skies and sunshine. The high season returns! 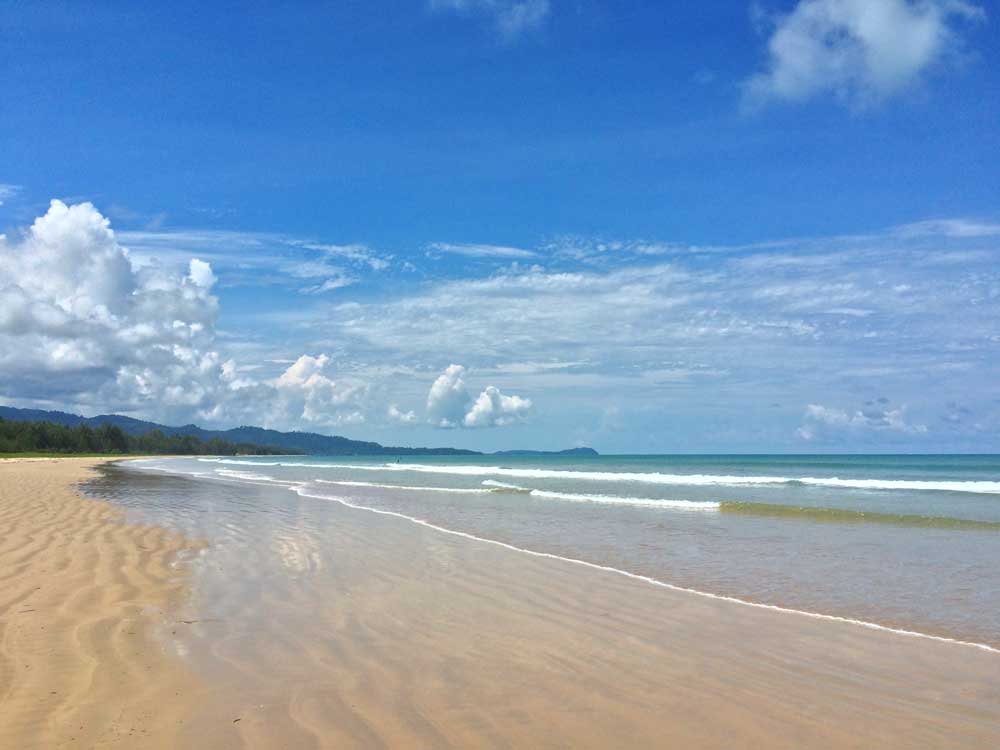 The beach at Pakarang looking towards Khao Lak

Both 30th and 31st May saw continued fine weather, hot and sunny and a perfect excuse to hit the local beaches. Pakarang Beach further to the north of Khao Lak was idyllic, nice and quiet. A few surfers took to the waves enjoying perfect conditions.

This fine weather was forecast to continue at least another week into June. Check back soon to find out if it did.